I absolutely love looking through old photos. I stumbled upon these as I was unpacking and going through my mountains of photo discs, and here is how the story goes....

Back in March 2008 we had a very much anticipated 8 day family trip planned to Disney World. We are meeting some friends there so good times and great memories are guaranteed. I adore Disney and could not wait to get away from the cold Chicago winter and into the sunshine of Florida. Three days before we are to leave I come down with the flu, strain B and I am miserable. Can NOT function miserable, y'all know the kind of sick I'm talking about. I am a last minute packer so I have nothing done and now I am sick and nothing will get done until the absolute very last minute. My son is only 2 years old, so he is no help but luckily I do have a husband that is pretty capable and is the only reason we were at all prepared for this trip. We were flying out of Rockford Regional Airport, which is fabulous to fly out of, especially with a young child. It is small and easy to navigate and only have commercial flights going in and out a couple times a week. Two days before we are to leave, I get a phone call from the airlines saying that they have changed our flight and we now have to leave one day earlier than planned or find a different flight.  Seriously ?? What the "F" was my one and only thought. At this point it is too late to get another flight at a reasonable price so I just need to "Suck It Up Buttercup" and find a hotel for the extra night and get my sickly butt in gear and get us packed because we leave tomorrow !  Anyone that knows me is probably thinking how very out of character it is for me to complain about having to leave early and spend an extra day on vacation. As sick as I was, I truly NEEDED that extra day. I am pissed that this is happening and am not sure how I am going to get better at all now and be able to enjoy this vacation. As I am booking a hotel for the extra night and extending the rental car a day, I see a headline pop up that changes my whole perspective of this tragic situation that has been thrust upon me. It reads ......

Now I am in the midst of a, "Seriously ??  How cool is that ?" moment. I have always dreamed of seeing a shuttle launch but never thought I would actually have the chance to see one literally fall in my lap like this. It seemed too good to be true. As I read the story, I discovered that the Space Shuttle Endeavor is set to launch from Titusville, FL at 2:28 am, which is less than 12 hrs after we are due to arrive in FL,  now that our flight time has been changed, and is only a short 45 minute drive away from where we are staying. You guessed it, sick or not I am going to go watch this amazing event ..... no longer pissed that the stupid airline changed my flight time either....

We arrive on schedule in FL and get settled in our hotel. After dinner I take a nap,  get as much cold & flu medicine in me as is needed to get me through the night and set off on my great adventure. My amazing husband graciously agreed to stay at the hotel with our son so I am to go it alone. I am the adventurous type by nature, so it's all good. The drive to the coast in the middle of the night was very pleasant.  There was soooooo much traffic, as to be expected. I had left early enough that I had plenty of time to get there. The atmosphere of everyone driving to view the launch was absolutely electric. Everyone had their windows down and were whooping and hollering with excitement as our cars inched their way down the highway to Titusville.  Even with leaving extra early, I only arrived about 1/2 hr. before the shuttle was scheduled to launch. I got lucky and amazingly found a parking space. I had no idea where to go so I followed the mass of people and found my way to a dock where I had a clear view of the shuttle sitting on the launch pad across the bay.

I don't know if it was the meds really working well or just the sheer excitement of BEING there, but for the first time in days I felt great. I mean FANTASTIC. Not at all sick. Incredible.

The amount of people lined up all along the coast went on as far as the eye could see. I can not even attempt a guess at how many proud Americans were there to witness this awesome event, in the middle of this gorgeous night. They had a P.A. system set up with a live broadcast going on. We could hear Mission Control and the astronauts talking and going through all their last minute safety checks. When they started the final countdown before blast off the crowd erupted in cheer. I can still hear it ... 10, 9, 8 ....

I saw the roll of smoke and what appeared to be a fireball, but there was no loud sound like I expected. it was silent. I don't even remember the vast crowd making noise, everyone was in utter amazement of what was happening before us.  I never took my camera away from my eye for the entire launch. I kept the shutter depressed and saw it all through my lens.

This was the first image in the series I captured. 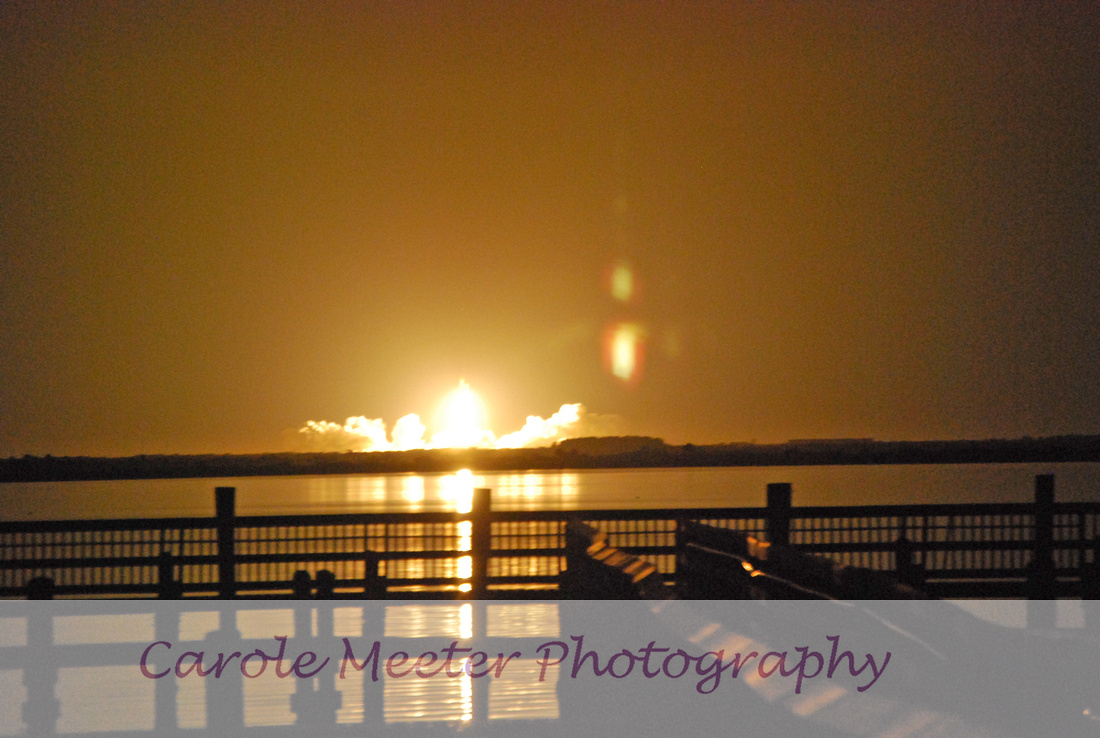 The entire launch from the moment Mission control completed the countdown and I saw the first smoke appear until I could no longer see the shuttle took less than 12 seconds. 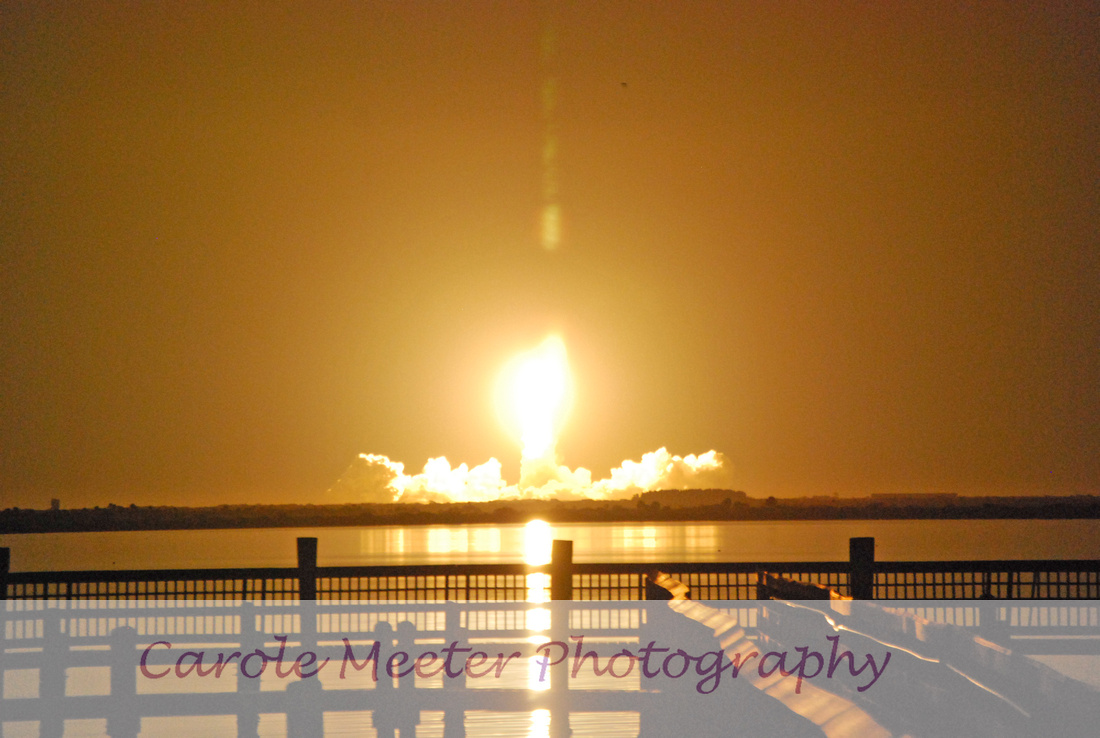 I started to tear up, it was a very "Proud To Be An American" moment for me. 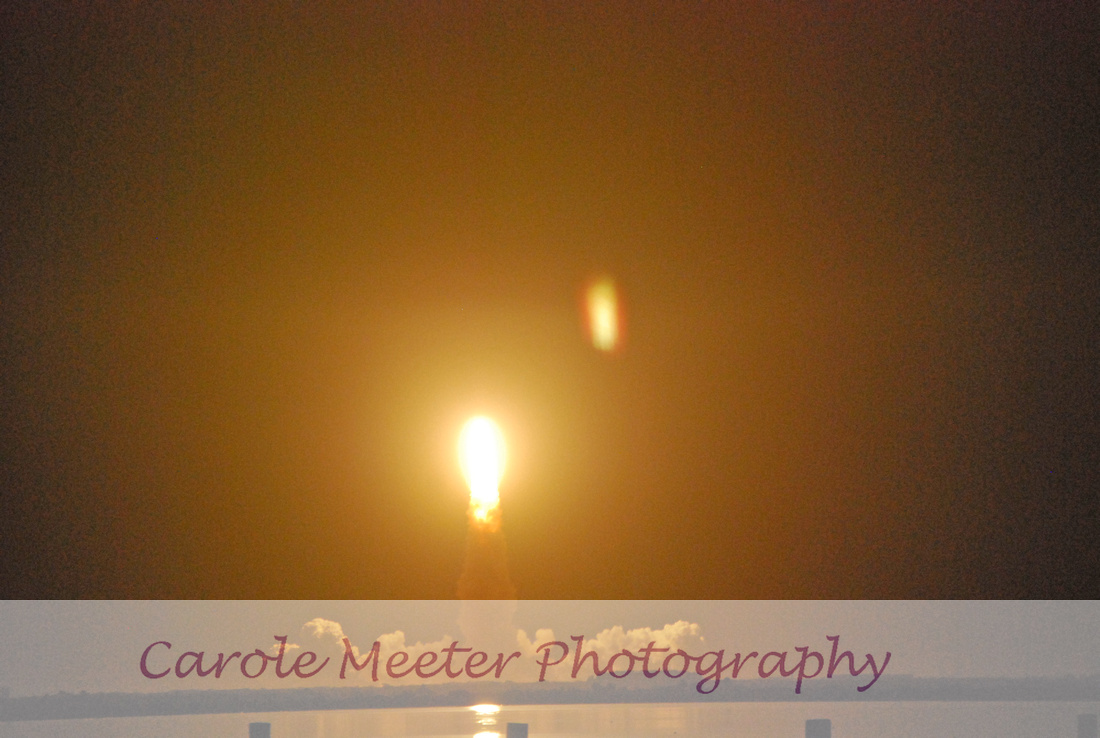 12 seconds of one of the most vivid memories I will ever have. 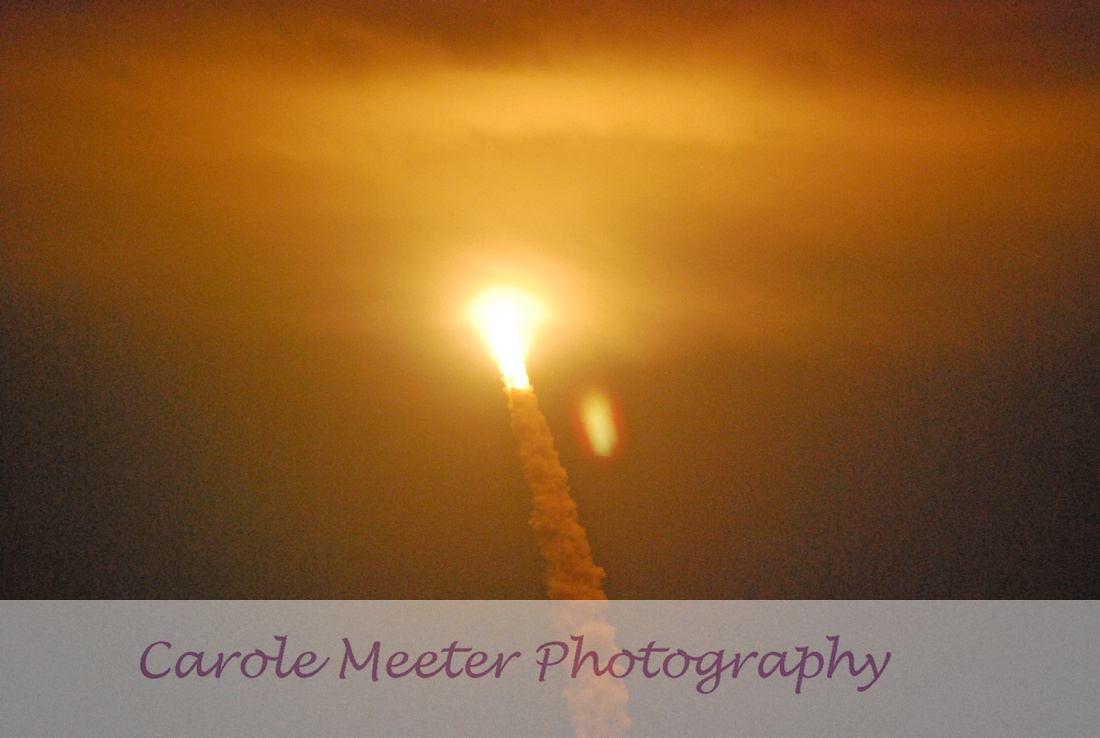 I sometimes wonder if it would have looked different, or more amazing if I had taken my eye away from my viewfinder to watch. No regrets, I don't believe in them. These images are very special to me and I know I would have regreted NOT capturing them.

Just like that, the shuttles leaves the atmosphere. 12 seconds is all it took.....

The shuttle is out of sight, and NOW is when we hear it's roar. I stood on that dock, completely silent, staring up in awe at where it had left it path of smoke,  until I could no longer hear it's mighty roar. One of the most amazing experiences in my life, occurring on March 11, 2008.

This image is slightly blurry from me shaking with such raw emotion. Notice how bright the sky looks. Let me remind you that it is 2:28 am. The entire sky was completely lit up as if it was daytime by the launch. It remained that way for what seemed like several minutes after, but I am not sure how long in lasted in real time. 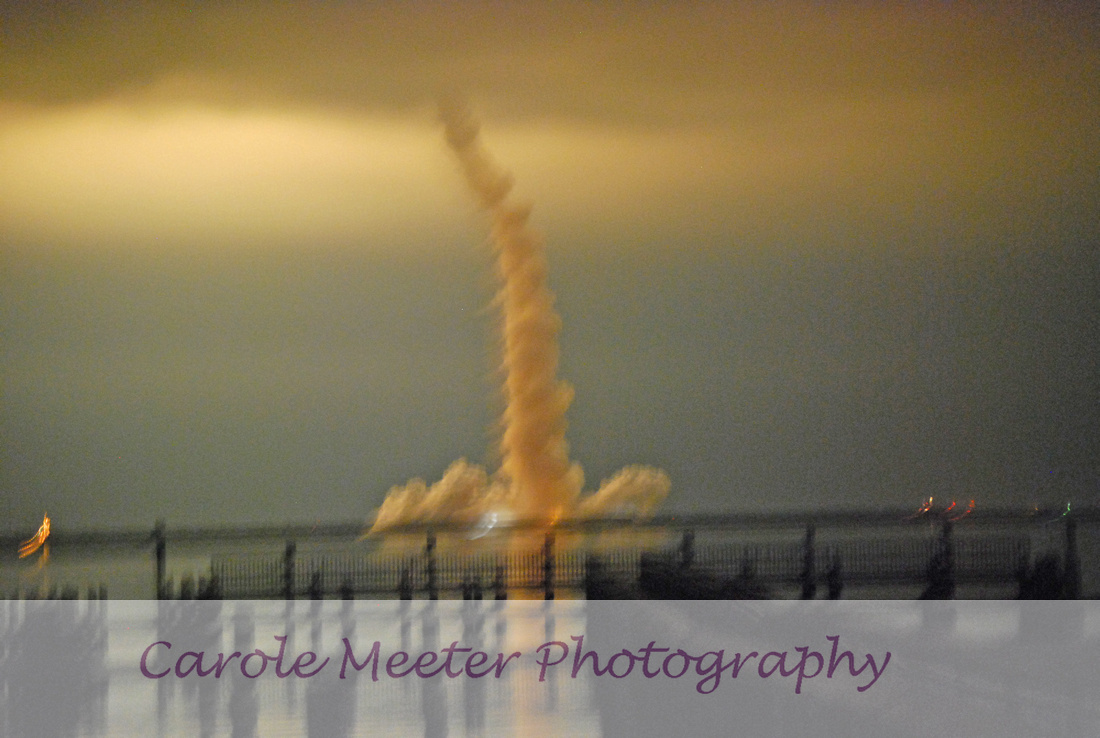 The Space Shuttle Endeavor is now on display at The Samuel Oschin Pavilion while they construct it's permanent home, a new addition that will be called Samuel Oschin Air and Space Center, located south of downtown Los Angeles. Once the project is complete, I will be making my way there to view it once again - up close and personal this time.

"Anyone who sits on top of the largest hydrogen-oxygen fueled system in the world, knowing they are going to light the bottom, and doesn't get a little worried, does not fully understand the situation"  ~~ John Young, after being asked if he was nervous about making the first Space Shuttle flight in 1981.